Starting from April 2013, if a marketer wants to include a contact number in an Adwords Ad, they need to use the call extensions feature. Google will start disapproving any ads that include telephone numbers in the ad text, according to a recent policy update.

The official word from Google:

“In the next few weeks, we will no longer allow phone numbers to be used in the ad text of new ads. Advertisers who would still like to promote phone numbers in their AdWords advertising can use the call extensions feature. We’re posting this alert now to provide adequate lead time to make ad changes.”

While an ad like this is currently visible, it will no longer be allowed in AdWords:

The change was enacted in April of this year, but Google made the announcement last week in order to give businesses enough time to react. It seems that there are a few things to keep in mind starting in April:

Using call extensions with a Google forwarding number allows you to measure conversions. You can find details such as 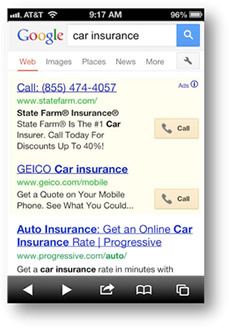 Advertisers will continue to be charged for a standard ad click every time a mobile user clicks on the forwarding phone number link or “Call” button (this is not a new charge), both of which can be seen in the below screen-shot:

The biggest takeaway from the news is just the importance of getting started. Phone numbers aren’t important for every type of business, but if the benefits work for you, then now is the time to make it happen. Soon any phone number in your AdWords ads, even if they are old, will be removed.